Hmm, bit muddled here. My last book post was two weeks ago and was week 22, miscounted somewhere. Well, as long as I have 52 books in 52 weeks at the end of the year, that's all that counts I suppose.

My book for week 22, sorry week 23 was The Miniaturist by Jesse Burton. I had had my eye on this book for a while and then bought it from trusty Amazon to make up the free postage. In the meantime my book crossing buddy Liz from Wheel On The School reviewed it. Meantime my book lay there, making me feel guilty. My son and his partner had gone to Amsterdam last year where the novel is set, I HAD to read this book. This weekend my daughter is in Amsterdam and The Hague with some old besties from school. I REALLY HAD to read this book. So, off it came to England with me on a mini holiday. 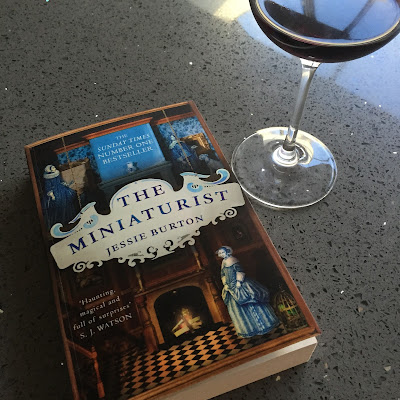 At first I thought I had made the wrong choice for a holiday read. My holiday reads are generally crime, and often short stories. Rumpole of the Bailey, Sherlock Holmes, yet again. You know the type of thing. But I persevered, I had to, I had nothing else to read.

And I am glad I did. The novel is set in Amsterdam in 1686. Nella, a  rather young and innocent girl arrives to marry an elderly (?) merchant, Johannes. Johannes is wealthy, 39 years old (?) and unfortunately rather distant towards Nella. His sister is a force to be reckoned with and the two servants could go either way with her.

To stave off her boredom Johannes commissions Nella a doll's house. A mysterious miniaturist begins to send her exact replicas of the merchant's house. But how does this miniaturist know what to send, and what do these offerings mean?

At first I found the actual miniaturist a distraction to what seemed a good story but gradually the two stories intertwine. I would definitely recommend this book and this is one that will be winging its way to my friend Anne. Love a book I can pass on to someone else.

I would include all sorts of photo props here. I do have a doll's house I bought myself, to give me an interest, around fifteen years ago. I also have lots of furniture and props, but unfortunately my dolls house is unbuilt, unloved in my roofspace. If I brought down bits of it, it would reignite the huge "marital discussion" we had about it at the time. Well, it was on offer. The dolls house emporium does deliver awfully nice doll's houses. Go check them out, the  link will show you my house.

linking up with 52 books in 52 weeks, week 23
Posted by helenjean@midgetgemquilts at 13:29