September 24, 2018
I would love to start a new project. I would love to make these project bags I keep wittering on about, and I would love to make some "wee braw bags", possibly for Christmas presents. I can't though. I can't/won't let myself start another project until I finish some up. I am neither a monogamous sewer or knitter. I like to have a couple of things on the go, what I like to do depends on the mood and the time available. I do reach the stage though, where I need to finish up. You ever get like that? Its like living with a certain level of untidiness, but there is a level of untidiness which you can't emotionally cross? So, its tidy up time kids.

Tidy up the Quatrefoil quilt. The What's Out The Window? quilt. This was my first foray into free machine quilting for many years. I was pleased even to achieved this basic level. I was pleased until I looked at closely, and decided it was a mess. It really was. Thankfully I hadn't started the quilting in the white at that stage, but the quilting in the black sections was extremely dodgy. Operation unpick began.

So where are we now? I have finished the pebble, or tiny swirly circles in the white. It took a lot longer than I anticipated. Next time the pebbles may be a grade larger! 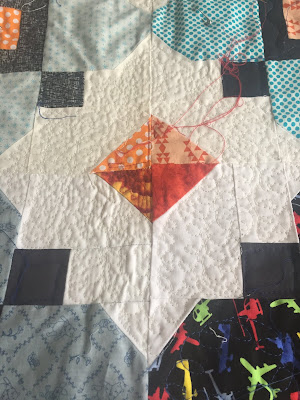 Next I am attacking the black corner stones and the black strips around the centre square. I am unpicking as I go and replacing with the black pebble stitch. So far so good. I have done about half now.
Before: 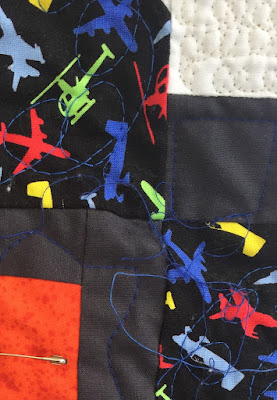 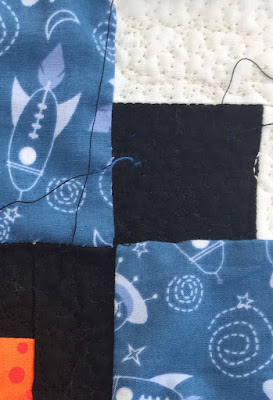 I am not sure what to do in the central square. Maybe a zig zag backwards and forwards.

The actual quatrefoils, I am not sure either. At present there is a sort of a scribble in some of them. That is definitely coming out. Some of the fabrics have a design element to them, planes, hippos, rockets. The usual sort of thing you see out of your window. 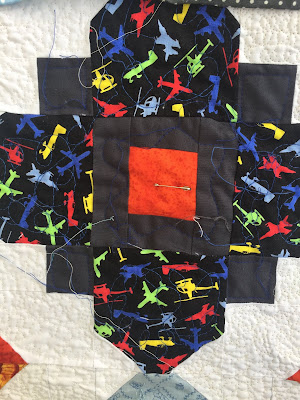 I don't want to obliterate that bit by over quilting, but the scribble has to go. 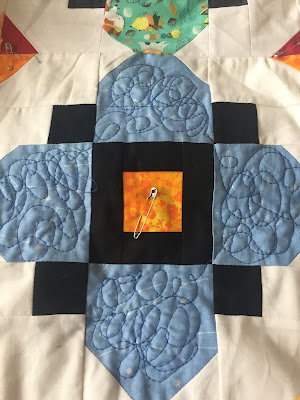 The quilt is for my grandson. He needs to see out the window! That's how he will learn. He is already able to climb up on the settee and watch out the window. He misses nothing! The bin lorry is a particular favourite. Bicycles and cats run close a second. One day the local primary school went past on a school walk and the children all waved at him! That really made his day.

We see my grandson again very soon. I would love to take this over with me. Practically speaking, I have room in my "hand baggage only" this coming trip. Next time I am taking a hold case but I anticipate it being full of Christmas presents! (and hopefully a wee braw bag too).

I might "cheat" and sew down the binding before I have finished. It will make the finish more achievable. My fingers are aching tonight though. I have been sewing in the ends on my Playtime Plus Quilt. It is all very well doing this fmq, but there are a lot of ends to be buried. I always find myself singing that old Harvest hymn, Bringing In The Sheaves when I am sewing in the ends. 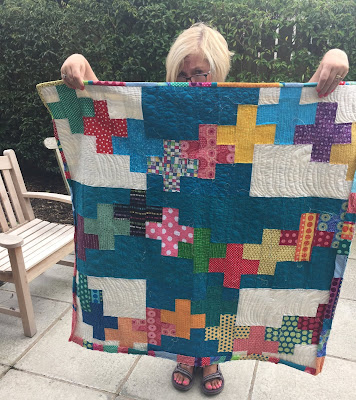 I also baked a load of biscuits today for my daughter, who has friends over tonight. If you had seen the look on my husband's face when I told him he could have a broken biscuit!  You see, I had to see how many good ones there were first for the girlies, before we had our share. Luckily there were enough this time for her and us. He just preferred a biscuit which wasn't broken or burned!  This started me thinking. Generations ago, or maybe not so long ago, the "daddy" got the best bit of meat, the best dinner. Generations ago, there was a logic to this, the man of the house did physical work, needed the calories. I remember my mother laughing about the concept that the "daddy" deserved the best steak because he was head of the house, the king so to speak. He got the best and everybody else fitted in. Neither my own mother nor father held any truck with that and neither would  anybody my generation I would think. My father told me the story of how his girl cousin couldn't get her dinner until her farmer father, 10 (yes, 10) brothers and assorted male relatives had got theirs. When they finished eating and left the table, she got what was left. My father and grandfather thought that was appalling and my grandfather actually argued her case. It didn't help and probably didn't help her in the long run. I told my daughter about this today. She was appalled to think this how it was in the 1940s for some women, which really isn't that long ago. This cousin of my dad's only died a year or two back.  Isn't it amazing the philosophy which comes from a broken biscuit!

Just had another thought. They say when they make whiskey, that the whiskey that evaporates in the  oak barrels is the "angels' share". Do you think the biscuits that break are the angels' share? No, they're not. We had them stirred through natural yoghurt with local honey and mandarin oranges.

Now it is time to stop thinking and get on with things! 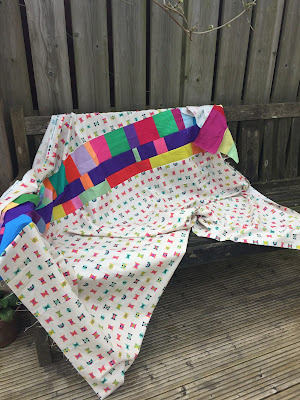 The Message Is On The Back of the Postcard

The purpose of a postcard? To send a pretty picture of somewhere you are? To send a message on the back from somewhere you are? Or a combination of both? Remember those days when you felt forced to send postcards? To your parents, to your granny, to your friends, to work. Offence might be taken if you didn't. "What happened to my postcard?"   I was asked one more than one occasion. Once by work, they liked to put them up on the noticeboard, it became accepted I, my pen, my postcard and my stamp were never in the same place at the same time. The second time was by a dear relative (?) who never went anywhere herself, but liked to get the postcard, and also a present. Funny the things that come into your head when piecing a backing. With all this in mind, I couldn't possibly put just anything on the back of my Postcard from Sweden quilt, aka, my Writing from Whitehead. It had to be a clear thought out message. I looked for quite a while for the perfect backing fabr 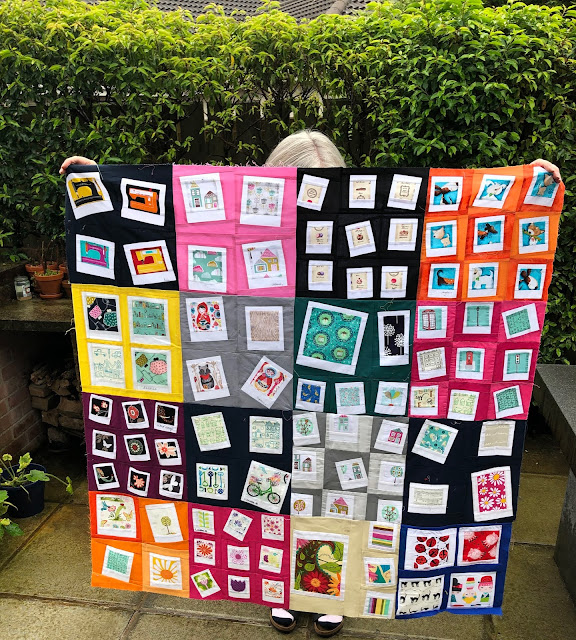 Keeping in the zone, with my mood for tidying things up and finishing things off, the non housework things anyway, I had another look at my polaraoid quilt.    This was started eons ago. I can't even remember how long ago. It was the last year I was in the Bee for Modern Irish Quilting Guild. I had seen some "photgraph" quilts and they really drew me in. At that time Capitolaquilter had a quiltalong of fabric polaroids and I had been following them on instagram. I had asked my fellow Bee members to make me a square that I could cut down to a finish of 12". I didnt mind how many photos there were, but to have them framed in white with a deeper section at the bottom, like the old polaroid photos. They could be set down like a fan of playing cards or thrown down randomly. Like in all Bees, they resulting  squares were varied. Some were spot on for what I wanted, and some less so. I then set them to the side. Fast forward a couple of years and these periodica