52 Books in 52 Weeks, week 27, still not sure how many I have read, hopefully in or around the 26. Just as my last blog post was two bee squares done in the one month, so this book review is two week's books in the one review. Both as it turns out Victorian novels, one original, and one a rewrite.

This mad passion for Sherlock includes all the Sherlock add ons, as you might have gathered. So, I was very pleased when my Stateside son sent me The House Of Silk by Anthony Horowitz.

Anthony Horowitz is well known for the Alex Rider series for children. He is less well known as the scriptwriter of the Midsommer Murders series on TV. The original books were written by Caroline Graham, I've read those too, and he scripted then wrote more based on the original Inspector  Barnaby character. He was invited by the Conan Doyle estate to add a "new" story to the Conan Doyle collection. This is a concept that has worked well with the Jane Austen novels, a rewrite by a new author. But this is different in that Sherlock is still Victorian and still says such magic phrases as "what's afoot?". 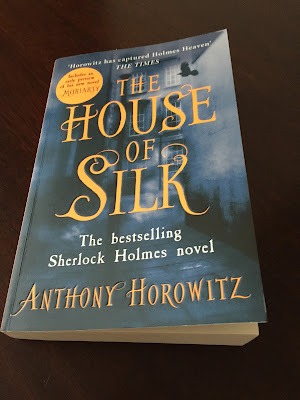 The House of Silk is a very enjoyable read, a very pacy read and still has lots to interest the modern reader. Sherlock hasn't lost the plot. It really is the Conan Doyle "brand" rewritten in a way that modern readers enjoy but keeping the same concept. There are several seemingly unrelated strands that weave their way through the story, the theft of some jewels, the murder of a ruffian, the murder of a street boy. And what is the House of Silk? Ably assisted by Dr Watson, who Martin Freeman was born to play, Sherlock sorts it all out.

The House of Silk was published in 2012, before the Jimmy Saville mess, the accusations that public figures, especially in politics, may be involved in things we really don't want to think about. So, its a little ironic that not only was this a problem in Victorian days, but sadly is still going on today.

One last thing, my friend who I have previously referred to as Miss F, and I, have both independently told Tesco supermarket staff this is definitely not a book for children. For some reason they keep putting it with the children's books.

And, don't tell my son, but I had read this before. I  read a library copy in hardback when first published and on a waiting list. It was lovely to read it again at a more leisurely pace.

My second book of the week was another traditional Victorian novel. An original this time.
Three Men in a Boat by Jerome K Jerome. When we were on our great Coulter Road Trip of June we went to Hay-On-Wye in Wales. I actually thought it was in Herefordshire, England, but apparently not. There we go, geography never was my thing. Anyhow, in the biggest secondhand bookshop, which is a converted cinema in Hay, I bought just one book. Three Men in a Boat. I have read this book before. Go Figure.

Having bought it, I thought I had better read it. It was difficult being in a sweetie shop with so many sweeties. I didn't know which sweet, sorry book to choose.

Anyhow, I reread Three Men in a Boat and it was hilarious. Well worth the reread. Better on the reread than on the first read.  It is the sort of book a father would give you, or a grandfather. You read it, smile politely and hand it back, saying "thank you it was hilarious". 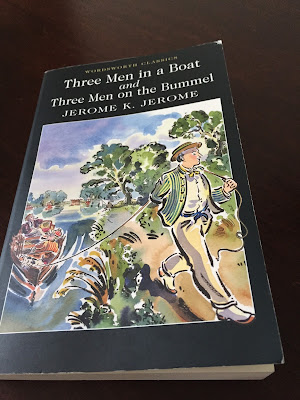 Fast forward twenty years, and I really enjoyed this. The adventures of the three men really were funny and have stood the test of time well.  We may live very different 100 years on, but funny is funny. Go read this. Now.

A quick funny story about Hay-On-Wye. Our first port of call was, as always, the public toilets. Whilst waiting for the husband to come out of the gents, a Welsh council van pulled up. (that may have been when I first suspected I was in Wales). Out got two gentlemen like the bearded men of   ZZ Top. Real hill billy mountain men. No offence meant. They went into the toilets with the biggest plunger I have ever seen. Then one of them came out a lifted a stick from the back of the van. No, a branch from a tree, with the leaves still attached. And, he headed into the gents. Now, that must have been a big job. Husband missed all the fun and wondered I was laughing.

Hay-On-Wye is actually a very interesting place. A small town in the Welsh borders which Richard Booth decided to make into a book town, rather like he had seen in the States.

Do you like the gratuitous photo of our, my, new coffee table. It is a real pain getting my lardy ass off the chair to reach my coffee cup, or lift my book. So I now have a new coffee table, just for me. In orange. It even has a little bucket type thing at the bottom to hold my knitting, socks as it happens. Now, if only I had my lucky orange socks from twenty years ago.....

Helen x
linking up with 52 books in 52 weeks
Posted by helenjean@midgetgemquilts at 09:37